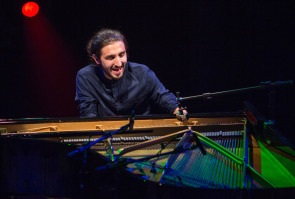 The origins of jazz-mugham, an unique fusion of traditional styles of Persian / Iranian improvisation with jazz, come from the work of the Azerbaijani pianist Vagif Mustafazedeh in the 1950s, of which Isfar Sarabsky is one of the most prominent followers in the modern scene of the jazz from Azerbaijan. Classically trained grandson of a renowned opera singer, Azerbaijani Isfar struck his first international chord in jazz, winning the 2009 Montreux Festival piano competition aged 19. Stunning audiences across Europe, the USA and UNESCO with music that is all of sensitive and stunning, classical and jazz, standards and self-penned,
he is always on the move. And always on a solid base from Mustafazadeh (look him up) back to Tchaikovsky his playing always flows artistry and excitement. There’s never a dull moment or thought and an Isfar Sarabski live concert is exactly that.Along with the renowned azeritarist Shahriyar Imanov as special guest, who introduces the sounds of tar, a typical string instrument with persian origin, this project transports the audiences to sonorities rarely experienced in a jazz concert. There is something special in Isfar’s music that results from a
consistent exchange - and until a few years ago unlikely - between essentially different cultures. As happened in the passage from the XIX century to the XX, with the emergence of a new (popular) music in the port cities of America such as Rio de Janeiro, New Orleans, Recife and Havana - in this second decade of the 21st century there are infinite new possibilities of cultural interaction.