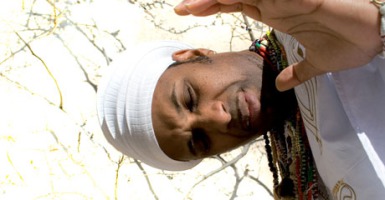 Composer-pianist-bandleader Omar Sosa was born in 1965 in Camagüey, Cuba's largest inland city. At age eight, Omar began studying percussion and marimba at the music conservatory in Camagüey; in Havana, as a teenager, he took up piano at the prestigious Escuela Nacional de Música, and completed his formal education at the Instituto Superior de Arte in Havana. Among his influences, Omar cites Peterson, Herbie Hancock, Chick Corea, Keith Jarrett, Chucho Valdés, and the pioneering Cuban jazz group Irakere. Moving in 1993 to Ecuador, Omar immersed himself in the folkloric traditions of Esmeraldas, the northwest coast region whose African heritage includes the distinctive marimba tradition. He relocated to the San Francisco Bay Area in 1995, and soon invigorated the Latin jazz scene with his adventurous writing and percussive style.

Mr. Sosa received a lifetime achievement award from the Smithsonian Associates in Washington, DC in 2003 for his contribution to the development of Latin Jazz in the United States. Nominated twice by BBC Radio 3 World Music Awards (2004 and 2006). In 2003 Omar Sosa received teh Afro-Caribbean Jazz album of the Year Award from the Jazz Journalists Association in NYC for his recording Sentir; and a nomination from the Jazz Journalists Association for Latin Jazz Album of the Year in 2005 for his recording Mulatos. In 2011 he received a Latin Grammy Nomination for Best Instrumental Album, Calma. In 2013 he received another Grammy Nomination for Best Latin Jazz Album Eggun.

In October 2018, Omar and violinist-vocalist Yilian Cañizares released Aguas, a very beautiful and personal album. Aguas reflects the perspectives of two generations of Cuban artists living outside their homeland, interpreting roots and traditions in subtle and unique ways.