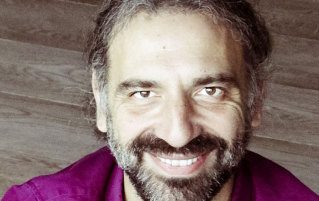 Music is a huge game to be re-invented time after time, alone or with different partners.

Bollani takes the stage to learn something every night and “because it is cheaper than paying a psychoanalyst.” He’ s constantly searching for stimulations everywhere, in music of the past, but most of all he’ s exploring the present, the moment being, improvising alongside great artists like his noble mentor Enrico Rava, Richard Galliano, Bill Frisell, Paul Motian, Chick Corea, Hamilton de Holanda.

With the same spirit he’ s infiltrating inside symphony orchestras such as the Gewandhaus in Leipzig, the Scala in Milan and the Orchestre National de Paris, being taken by the hand by directors brave and enthusiastic such as Riccardo Chailly, Krjstian Jarvi, Daniel Harding.

Since the age of 12, along with bassist Jesper Bodilsen and drummer Morten Lund, he is seeking a way to transmit to the public the same fun they experience whenever the voices of their instruments meet.

He celebrates the song-form alongside Caetano Veloso and Hector Zazou but also with renowned compatriots such as Irene Grandi, Fabio Concato, Elio e le Storie Tese.

When he’ s not playing, he’s writing books or creating theatre shows such as Primo Piano, with Banda Osiris or La regina dada, written and performed with Valentina Cenni, who, besides being a wonderful actress, is the woman who lives at his side.

In the radio, thanks to the cooperation with that wizard of David Riondino, he gave life to Dr. Djembè, omniscient musicologist who has been spreading seeds of irony and sarcasm for several years through channel RadioRai3′ s microphones.

On TV, after the experience at the court of Renzo Arbore, he threw himself into jam sessions of speech and music in two seasons of his Sostiene Bollani on channel Rai3.

Everything is always made to communicate joy. Joy in spite of everything, as the title of his recent work for ECM says, borrowing a phrase from the great Tom Robbins.

One of his historical projects is without a doubt his ‘Danish Trio’ with Jesper Bodilsen and Morten Lund. His last projects are ‘Napoli Trip’ (2016) inspired by the universe of traditional forms of popular Neapolitan Song (Daniele Sepe, saxophone. Bernardo Guerra, Drums. Nico Gori, Clarinet) and recently released, ‘Que Bom’ (2017), that counts on a vibrant Brazilian sound, representing a development of his successful album CARIOCA (2008). Not to forget his project for Piano and Orchestra, ‘CONCERTO AZZURRO’.