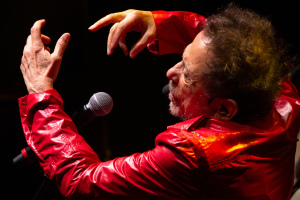 Tom Zé was born in Irára, Bahia. He grew up listening to popular songs that spread through the city speakers. In 1962 he entered Escuela de Música de Bahia, where he received a scholarship, and for six years he studied counterpoint, structure, composition, harmony and history of music. In 1968 he moved to Sao Paulo, where he began to gain awards and that same year launched his first LP called Grande Liquidação, with lyrics describing that great city where he had moved and where he lived without abandoning his bahian roots.

He was part of Tropicalism with Gilberto Gil, Caetano Veloso and Gal Costa. In 1976 he made "Estudando o Samba", which was received with perplexity by critics and the public because it was a very advanced production for its time. It was in 1990 when the album achieved international recognition.  In 1978, he sold his house to make experimental instruments: hertzé (a precursor of the sampler) and the “enceroscopio”, “buzinório”, which brought together sounds from horns and home appliances. In this same year he published the album Todos os Olhos, which for its unprecedented aesthetic was not truly understood. This is when he began his period of ostracism.

In 1990 this was "rediscovered" by David Byrne. The Best of Tom Zé album was the first album of the record label Luaka Bop, from the famous Talking Heads. Tom Zé resumed his career with successive tours to Europe and the United States, resuming his relationship with the Brazilian music scene to date. The documentaries Making Tom Zé (director, Décio Matos Jr.) and Tom Zé, Astronaut Libertado (by  Igor Iglesias, a young Spanish director) received awards at several Brazilian festivals and International festivals. Tom has written several books such as "Tropicalista Lucha Lenta" on musical creation in an autobiographical manner; Ilha Deserta co-authored with Luiz Tatit, Arnaldo Cohen, Eduardo Gianetti and others. His most recent musical release: Tropicália Lixo Lógico, is focusing on Tropicalism, with the participation of young composers in addition to Caetano Veloso and Milton Nascimento. He is currently preparing new projects, immersed in a bold creation, of an intelligence associated with joy and happiness.