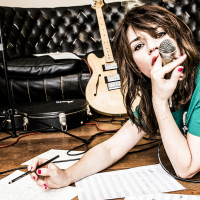 Carmen Consoli is nothing less than a star in Italy, well known for her authentically rough voice, the tasteful and sophisticated song-writing and arrangements and the significant and powerful lyrics. Being the first Italian female artist to perform at the Olympic Stadium, with more than two million albums sold and three times Platinum records only in Italy, the Sicilian artist has been developing a highly personal musical universe. Drawing inspiration from Verga and mythology, she has also used Arabic and French in her songs. Her “voice full of pain, compassion and strength” (Jon Pareles – New York Times) sings lyrics anchored to Sicily, whose characters suffer from gossip, stories of disappeared sons, treason or dreams of greatness. A real revelation since 1996, when she recorded her first album and participated in the Festival of Sanremo for the first time, in the following decades she has become (throughout an extraordinary discography of 15 albums) one of the most popular and permanent artists in Italy. After being the only Italian artist to take part in Bob Marley’s death memorial ceremony in Addis Ababa, she performed as headliner at the Summerstage Festival in New York’s Central Park and lately at David Byrne’s Meltdown Festival in London. She was the first female artistic director of the Notte della Taranta, the most important Italian world music festival of traditional Salentinian popular music; in her edition the public reached more than 150,000 people. During her career Carmen played all around Europe with frequent stays in France including a release all in French, Canada (among other at the major event Francofolies Festival in Montreal) as well as United States, Mexico, Argentina. Defined by Pareles as a beautiful combination of a rocker and an intellectual, Carmen Consoli collaborated with world-renowned artists such as: Goran Bregovic, Angelique Kidjo, Henri Salvador and Franco Battiato.