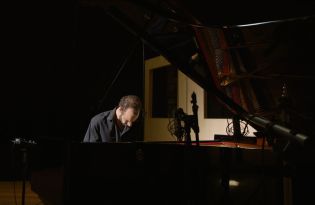 Júlio Resende started playing at the age of four. Musician, pianist and composer, he has already released seven albums, on a journey that begins in Jazz but goes through Fado and Word and electronic Pop-Rock, in a continuous search for the perfect place that does not exist but that allows him to explore more and more. In 2013, based on some of the most popular songs by the internationally renowned Portuguese artist Amália Rodrigues, Júlio Resende presented a new concept: bringing fado to the piano, dispensing with the voice, expressing only with his piano all that Fado means . "Amália by Júlio Resende" was unanimously acclaimed by all the Portuguese music critics.

Immediately afterwards, the pianist published “Fado & Further” in 2015, with the participation of Sílvia Pérez Cruz.

In 2017 the most daring album came out, different from all his creations. Based on the English poetry of Fernando Pessoa, he formed a pop-rock band with influences from indie and electronic music, which he called “Alexander Search”. In 2019 it was the turn of “Cinderella Cyborg”, a musical adventure, a metaphor for the relationship between man and machine, between the acoustics of the piano, the drums and the double bass and the electronic sounds of the pads. Between 2017 and 2020, Júlio has also served as musical director, pianist and co-author of part of Salvador Sobral's repertoire, with which he has played in more than 200 concerts throughout Europe in recent years. Now, in 2020, “Julio Resende Fado Jazz Ensemble” comes to us, with a completely innovative aesthetic in the world of Fado and Jazz, combining original themes played by a Portuguese guitar that is mixed with piano, bass and drums. Exploring is the artist's mission, not to stay stuck in the same place. And that's what Júlio Resende does.