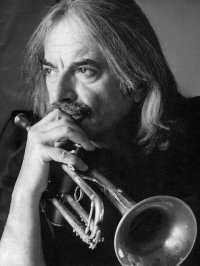 ENRICO RAVA is undoubtedly the best known and most appreciated Italian jazz musician. Always involved in the most diverse and stimulating experiences, he appeared on the jazz scene in the mid-sixties, quickly establishing himself as one of the most convincing soloists of European jazz. His human and artistic frankness puts him beyond any scheme and makes him a rigorous but careless musician of conventions.

His immediately recognizable poetics, his lyrical and poignant sonority always supported by an amazing freshness of inspiration, stand out strongly in all his musical adventures. Among his numerous discography are the unmissable Quartet (ECM 1978) "Rava l'opera Va" (Label Bleu 1993), "Easy Living" (ECM 2004), "Tati" (ECM 2005) and "The Words and the Days "(ECM 2007)," New York Days "(ECM 2009)," Tribe "(ECM 2218) and" On The Dance Floor "(ECM 2293) It is not difficult to use superlatives to tell about his musical adventure, so rich is his curriculum, so fascinating his musical world, so along the list of musicians with whom he collaborated, Italians, Europeans, Americans: Franco D'Andrea, Massimo Urbani, Stefano Bollani, Joe Henderson, John Abercrombie, Pat Metheny , Archie Shepp, Miroslav Vitous, Daniel Humair, Michel Petrucciani, Charlie Mariano, Joe Lovano, Albert Mangelsdorff, Dino Saluzzi, Richard Gallliano, Martial Solal, Steve Lacy, Mark Tuner, John Scofield etc ... He made tours and concerts in USA, Japan, Canada, Europe , Brazil, Argentina, Uruguay, participating in important Festivals (Montreal, Toronto, Houston, Los Angeles, Perugia, Antibes, Berlin, Paris, Tokyo, Rio and Sao Paulo, etc.). He has been repeatedly voted best musician in the annual referendum of "Musica Jazz" magazine, winning also in the "best group" and "best Italian disco" categories. Nominated "Knight of Arts and Letters" by the French Minister of Culture, in 2002 he also received the prestigious "Jazzpar Prize" in Copenhagen. In recent years he has appeared in the first places of the referendum of the American magazine Down Beat, in the section reserved for trumpet players, behind Dave Douglas, Wynton Marsalis and Roy Hargrove, and in the one reserved for the best groups, with the quintet called TRIBE. And it is the first time that an Italian formation is included in this ranking.

Currently, in addition to his RAVA TRIBE (together with Gianluca Petrella, Giovanni Guidi, Gabriele Evangelista and Fabrizio Sferra) he likes to perform with the very recent quartet with Francesco Diodati on guitar, Gabriele Evangelista on double bass and Enrico Morello on drums. With this new lineup, flanked by Gianluca Petrella, in January 2015 she recorded a new album for the ECM "Wild Dance", released in September 2015, which has enjoyed great success and appreciation from audiences and critics. Rava New 4et was elected best group of 2015 according to the referendum of the magazine Musica Jazz.