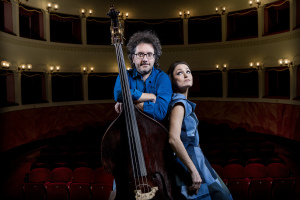 Sometimes things don’t happen by chance. That was exactly the case with MUSICA NUDA, the unconventional duo born from the accidental meeting of Petra Magoni and Ferruccio Spinetti. In 2003 the pair crossed paths for the first time: Petra is a singer and Ferruccio plays double-bass for Avion Travel (the band he was in from 1990 to 2006). Petra Magoni is about to embark on a mini tour of small clubs in her native Tuscany, accompanied on guitar by a friend. But on debut day, the guitarist falls ill. Rather than cancelling the date, Petra asks Ferruccio if he feels like sitting in instead, and he promptly accepts. The gig is such a success that in a matter of a few weeks the two members of this brand new Voice’n’bass combo put together a full repertoire, picking the songs they love the most, and in a single day they record their first album, “MUSICA NUDA”, in a studio near Pisa. MUSICA NUDA spontaneously becomes the name of their project and of the band itself. The chemistry between them is perfectly obvious, but neither Petra nor Ferruccio could ever imagine the achievements that are to come in such a short time: hundreds of performances in Italy and abroad, prestigious awards (Targa Tenco 2006, best tour award at the 2006 Faenza Mei, Les quatre cles de Telerama in France in 2007), recognition from fans and the media, TV appearances and radio broadcasts on major Italian and foreign FM stations. Over the years, Ferruccio and Petra have taken their project around the world, performing in prestigious venues such as the Olympia in Paris, and the Hermitage in Saint Petersburg. They have also taken part in the Pina Bausch Tanz Wuppertal Festival in Germany, where they were also a support band for Al Jarreau’s tour of the country. In March 2014, they were the sole musical guests of the “World Theatre Day” held in the Italian Senate, before the president of the Senate Pietro Grasso. Over a span of 12 years, Petra and Ferruccio have held over 1,200 concerts, produced eight studio albums, two live albums, and a DVD. Two years after their previous album, the duo are back on the international music scene with a new project that places a seal on a success-studded 12-year-long career. On January 27 th, Musica Nuda released the album “Leggera” under the Warner label.