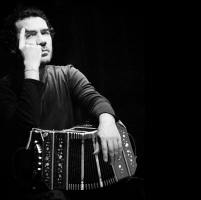 Daniele di Bonaventura was born in Italy (Fermo, Marche) and he is a composer, arranger, pianist and bandoneonist. From the beginning of his work, he has been interested in musical improvisation although he studied classical music (Composition conservatory diploma): since he has eight years old, he studied piano, cello, composition and orchestra conducting. His collaborations extending from classical music to contemporary music, from jazz to tango, world music and in theater, cinema and dance too.

He recorded and published more than fifty album with many label including Via Veneto Jazz, Philology, Manifesto, Felmay, Amiata Records, Splasc(H), World Music, CCn’C Records and he recorded for Harmonia Mundi Record an opera for bandoneon e string quartet called “Sine Nomine”. The latest collaborations are with the musician Miroslav Vitous for his cd called “Universal Syncopation II”, which won the German Critics Prize (Preis der deutschen Schallplattenkritik) as Album of the Year 2007, published by ECM. With the same label he recorded an album titled “Mistico Mediterraneo” with Paolo Fresu and A Filetta’s Choir. In 2013 with Tuk Music, Paolo Fresu’s label, he released a double lp called “Nadir” where he played bandoneon and piano. In 2014 he contributed to Torneranno i prati’s soundtrack, a movie directed by Ermanno Olmi. In March will be released for ECM an album in duo with Paolo Fresu and a documentary directed by Fabrizio Ferraro shot during the recording session in Lugano with Manfred Eicher, the ECM founder.