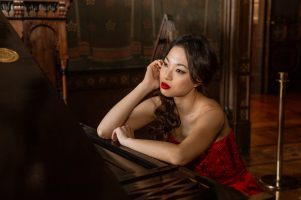 “Brilliant virtuosity and refined musicality, the necessary stylistic malleability to play a frontier style like Kapustin, Sun Hee You  is more characteristic of jazz, even though she comes from a background exquisitely classic ”Gastón Fournier- Facio.

Acclaimed by international critics and the public, for her latest record dedicated to the Ukrainian composer Nikolai Kaspustin, who was compared to the legendary Oscar Peterson for the timing-rhythm and to Bill Evans for the sound and touch, the pianist from South Korea is a brilliant example of a new generation of classical musicians. Trained in Seoul, she attended the Yewon School, the famous Korean musical institutionfor child prodigies, having won several competitions since her early years of piano study. Sun Hee You debuted as a soloist at the age of 13 with Yangeum Orchestra in Seoul, with Beethoven's Concerto No. and the Concerto in D Major of Haydn. At the age of 14 she moved to Italy where she graduated from the Conservatory of Santa Cecilia, and continued her studies with the legendary pianist Lazar Berman and Valentina Berman, asking for advice from renowned artists such as, Bruno Canino, Oxana Yablonskaya, Boris Petrushansky and Paul Badura-Skoda. She was also formed in chamber music at the National Academy of Santa Cecilia with Rocco Filippini. Her particular focus on the music of the 20th century leads her to be published for the NAXOS with engraving by Alfredo Casella, in repertoires for the piano and orchestra, in particular the Partita for Piano and Orchestra, winning the Grammy Award nomination, for live recording of the Chorus of the Dead of Goffredo Petrassi. She then switched to the Piano-Classics label for the disc entirely dedicated to the Ukrainian composer Kapustin. This last record, a combination of classical in musical structure and jazz in style and language, was sould out  after just two days of official distribution in Korea. She has also performed at important music institutions and festivals such as, Società del Quartetto di Milano, Società Aquilana of Barattelli concerts, Musical Academy Chigiana, The Concerts of the Quirinale, Festival of Nations, Festival of Ravello, Rome Jazz Festival, Ohrid Festival, performing as a soloist with orchestras: Sinfonica Abruzzese, Rome Symphony, Kaunas Symphony Orchestra, Stara Zagora Symphony Orchestra collaborating with directors Julian Kovachev, Rui Massena, Pavel Berman, Francesco Ivan Ciampa, Yun Ho Chu.

Award-winning in Italy and abroad, she often also won the special prize of the public, for her passion for the keyboard based on a profound artistic and professional seriousness. In addition to the traditional concert activity, she is involved with special projects and collaborations. Making the musical script, playing in a theatrical project "Alexis" based on the novel by the writer Marguerite Yourcenar; exploring a new musical genre with the electronic musician-sound artist Martux_M, creating a synergy between the piano and electronic music. In 2018 she was Special Guest in the Alchemaya Tour of singer-songwriter Max Gazzè treading important Italian arenas such as the Terme di Caracalla, the Sferisterio di Macerata, the Arena of Verona and the Ancient Theater of Taormina and bringing the music of Rachmaninov, one of her favorite composers, to a very large pop audience.