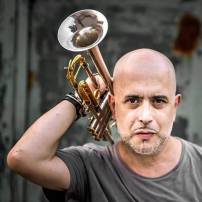 Flavio Boltro was born in Turin on May 5, 1961. His father was a musician, a trumpet player, jazz fan; his mother a teacher. "I fell in Jazz when I was very small, I was three years old. My father took me on his lap before going to sleep and made me listen to Armstrong and all the records of that time.” It is in the village of Pianezza, 25 km from Turin, that he settles at the age of 5 and spent his childhood and adolescence.

Flavio Boltro is undoubtedly one of the greatest representatives of the jazz trumpet in Europe. Michel Petrucciani understood this very well by calling him to be part of one of his best bands. Flavio is creative in the true sense of the word: he knows how to create his own music. Far from being content to play a piece, he gives life to it! For Flavio, live reproduction of existing music is not enough, it must be transfigured. It is as if he painted each note with his personal vision of the world.

In the current musical panorama, Flavio has found a place among a small group of real creators, who explore new musical perspectives. This trio highlights free improvisations, interacting differently each evening; while being able to take risks and play without a safety net.

This new album, called SPINNING, is an opportunity to listen to a complex and contemporary musical proposal in which the trumpet, the bass and drums mix to produce lyrical atmospheres on sustained rhythms. There are electronic effects mixed with more traditional jazz, which give life to open improvisations and captivating communication.

The choice of the trio favored the birth of contemporary and varied music. The absence of a harmonic instrument, like the piano or the guitar, allows the three musicians to enjoy a total freedom of expression, and to maintain an incessant dialogue between them.

The acoustic sound, enriched by unpredictable electronic effects, is at the heart of the music of the BBB Trio which finds its inspiration in rock, folk but also in the modal period of jazz of the sixties dear to Miles Davis.

With this new album, Flavio returns to lyrical origins and a certain rhythmic intensity. A great energy emerges from the 10 pieces that make up this new album. Flavio does not hesitate to draw on the Russian popular tradition, or in English pop, to explore new improvisations continually renewed.

To listen to Flavio Boltro in concert, it is to live a set of emotions and surprises, which engage us gently in an extraordinary voyage. With his trio, he reveals a unique form of expression that pushes his music ever further.