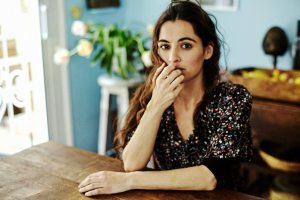 At the Escola Rita Ferrer of Palafrugell, she studied music theory, piano and alto saxophone, where she met the inspiring teacher Manuel Manogil. Her mother Gloria Cruz, art historian and teacher in artistic expression, founded the arts school Alart, where Sílvia studied and taught from 12 years old to 16.

Her father Cástor Pérez was a Galician specialist in habanera songs and guitarist, and with mother Gloria had founded a duo and composed the songs ‘Vestida de nit’ and ‘Temps perdut’. From time to time, young Sílvia and father Cástor used to sing in the bar “La Bella Lola” in Calella.

During Sílvia’s teenage years, she played the sax in funk, bossanova and jazz groups, and sang in the choir Nit de Juny, travelling in Italy, Hungary, France and Norway.

She moved to Barcelona at 18, where she studied in Taller de Músics school, learning cajón flamenco, harmony and jazz combo. She also learned sax in private lessons. One year later she started her training in the Escola Superior de Música de Catalunya (ESMUC) doing jazz singing, where she qualified in 2008, having been taught by teachers Mireia Lara and Carme Canela. She also did improvisation classes, and composition and arrangement alongside sax and singing.

In 2001 she had her first concerts in Barcelona with pianist Sergi Sirvent and the dancer Damián Muñoz. “34 Negro” stands out as one of their best shows, taking place in Teatre Lliure in Barcelona.

During the next ten years, she sang in more than ten groups, all in different styles, from flamenco to traditional Catalan music, jazz, folk and traditional South American music, and she was part of different groups such as Las Migas, Immigrasons, Llama, En la Imaginación and Coetus.

In 2011 she came to the end of this intensive period of learning as performer and she started to put her energies into a more personal area of work. Recognizing her need to express herself, Sílvia started writing in homage to her late father, producing the disc “11 de novembre”, which was first performed at Gran Teatre del Liceu in April 2012. Apart from singing, arranging and co-producing this recording, she also wrote and composed on it. For this piece of work, which was also produced in France and Portugal, she got various awards, such as Premio Internacional Terenci Moix 2012 and a Gold Disc for more than 20,000 copies sold.

She’s often taken part in other artistic disciplines. She has composed and sung for dance with Damián Muñoz or Israel Galván, in the theatre with Joan Ollé, Julio Manrique or Lluís Homar. In the cinema she also worked on the soundtrack for the film Snowhite, directed by Pablo Berger, which won ten Goya awards, amongst which they got the Best Original song for ‘No te puedo encontrar’ by Berger and Juan Gómez “Chicuelo”, sung by Sílvia.

In April 2014 she edits Granada, a recording of versions created with Raül Fernández Miró, which got a Golden Disc Award.

In 2015 she worked on the film Cerca de tu casa, as an actress, singer and composer of the soundtrack. Directed by Eduard Cortés, the film that was about evictions in Spain led to the

Sílvia’s last recording is Vestida de nit (Universal Music, 2017), in which she sings accompanied by a string quintet and  combines classic songs of her repertoire with new ones, and is arranged by Javier Galiana de la Rosa, Joan Antoni Pich, Carlos Monfort and Sílvia herself.

Vestida de nit’s has toured successfully to Argentina, Chile, Uruguay, Portugal, Turkey, Italy and France, and has performed as well in more than 30 Spanish cities.