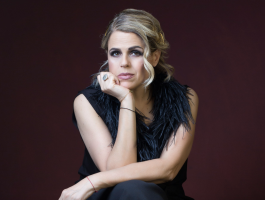 Singer, actress, eclectic artist with an innate propensity for research and experimentation. From this versatility, several special projects are born: “Romana - Homage to Gabriella Ferri”, “Sto Core Mio - Neapolitan night for Roberto Murolo”, “Musical Notes from the World”, a journey through the music of peoples and lands. Over the years she has collaborated with the greatest Italian and international artists, including: Ivano Fossati, Nicola Piovani, Ennio Morricone, Chico Buarque, Ivan Lins, Riccardo Cocciante, Lucio Dalla, Renzo Arbore, Renato Zero and Ron with whom she wins the Sanremo Festival in 1996. Winner of the Targa Tenco in 1997 in the best performer category with the album "Incontri e Passaggi", in 2019 for the best project album "Viaggio in Italia" with the Adoriza collective and in June 2020 with the victory of two Tenco plates for the best single song with "Ho amato tutto" and as best interpreter for the album "Morabeza" entering a club reserved for very few Italian artists who have managed to score a double in what is the most technical award in Italian music , assigned by a jury made up of journalists and music experts. In 2019 she performed the piece by Nicola Piovani "The invention of a poet", nominated for the David di Donatello 2019 in the category "Best Original Song".

She has 9 studio records and 6 live albums. Her latest studio work "Morabeza" came out in October 2019 and concludes a long journey through the countries of the world, which started with "Il suono della voce" (2014) and "Appunti Musicali dal Mondo (2017)". The album, produced and arranged by Joe Barbieri, contains original songs, contemporary reinterpretations of world music classics, sung in four languages ​​with great artists that Tosca met on this journey: Ivan Lins, Arnaldo Antunes, Cyrille Aimée, Luisa Sobral, Lenine, Awa Ly, Vincent Ségal, Lofti Bouchnak, Cèzar Mendes. In the last three years she has traveled the world with his show (Algeria, Tunisia, Brazil, France and Portugal). This world tour was the starting point for the documentary "Il suono della voce" (produced by Leave Music and Rai Cinema), directed by Emanuela Giordano, which premiered in the Alice nella Città section, within the Rome Film Festival. Rome 2019. A long journey without borders around music and words that has been enriched over time by illustrious collaborations including Marisa Monte, Ivano Fossati, Ivan Lins, Alice Caymmi, Rogê, Luiisa Sobral and many others. For "Il suono della voce" she received the Protagonist of the Year award 'for his performance in the finalist film of Documentaries at the Nastri d’Argento 2020'. For her theatrical activity we remember the passionate interpretations in the shows "La strada di Fellini", "Il Borghese gentiluomo" by Molière and "Il Grande dictatore" by Chaplin alongside Massimo Venturiello, as well as her forays into social theater with "I Monologhi vagina ”,“ Italiane ”and“ Donna comme noi”.

Always attentive to training, since 2015 she has been the general coordinator and director of the song section of the Officina delle Arti Pier Paolo Pasolini, a laboratory of high artistic training and Cultural Hub of the Lazio Region.

In 2020 she participated in the 70th edition of the Sanremo Festival with the song "Ho Amato Tutto" by Pietro Cantarelli, with which she won the Giancarlo Bigazzi award for best composition and sixth place in the standings. Her duet with Sílvia Pérez Cruz with the song "Piazza Grande" was rewarded with a first place in the ranking on the evening of the covers, voted for by the Festival orchestra. From 19 March the video of the song “Ho Amato Tutto” directed by Ferzan Ozpetek and produced by Leave Music and Officina Teatrale, in association with 39films and with the support of the Roma Lazio Film Commission, is online on VEVO.