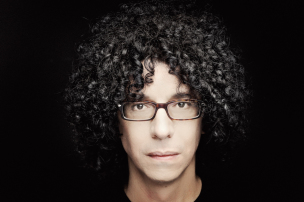 Jeans, T-shirt and sneakers. This is how the Maestro Giovanni Allevi meets his audience in the world’s most prestigious theatres, from Carnegie Hall in New York to the Auditorium of the Forbidden City in Beijing.

A composer, conductor and pianist, with his music, he has bewitched millions of young people, who, captivated by his example, are drawn to classical music and to the creative art of composition.  As a true innovator, his aesthetic intention is to lay the foundations for a new type of Contemporary Classical Music, where complex classical forms incorporate contents that belong to life around us, now.

Despite his diplomas in Piano and Composition, obtained with top marks, and his honours degree in Philosophy, he has a candid personality very similar to a childlike nature, even though all of his academic stature is evident at times.

Very shy and reserved, he seems perfectly at ease in front of the crowds of people, with whom he succeeds in establishing a profound and emotional dialogue, both when conducting a symphony orchestra and when at his beloved piano.  The audience, which is varied and includes all ages and nationalities, follows him with untiring enthusiasm on his numerous tours, transforming theatres into arenas worthy of a rock star.

A much-loved and controversial personality, he has brought Music back to the centre of academic discussions, including heated debates, but demonstrations of appreciation are not lacking and come  from excellent representatives of the cultural and scientific world, like opera singer Andrea Bocelli, étoile Roberto Bolle, architect Renzo Piano, Nobel Prize-winner Mikhail Gorbachev and writer John Grisham.

A great connoisseur of Eastern culture, Giovanni Allevi has developed his own personal view of music, as a means of entering the deepest areas of the psyche; an encounter with his music leads to the discovery of our most authentic identity. For this reason, each of his concerts is lived by listeners as a true mystical experience.

His best-loved compositions, as well as the numerous collections for solo piano, include:

The orchestral suite Angelo Ribelle (Rebel Angel), Concert in F minor for Violin and Orchestra,  the Toccata, Canzone and Fugue in D major for Pipe Organ,  the cantata Sotto Lo Stesso Cielo (Under The Same Sky) for 4 opera voices, polyphonic choir and orchestra and O Generosa! (Oh Generosa!) a madrigal for choir and orchestra, which has become the Anthem of the Italian football Serie A League.

As well as musical composition, his great passion is Quantum Mechanics, the subject of his Bachelor in Philosophy degree thesis “The empty space in contemporary physics”.  Like music, sub-atomic particles also move through space and their movement is mysterious and unpredictable, questioning the certainties of the Newtonian model.

An “obsessed” runner, as he describes himself, he dedicates at least an hour per day to running, an activity necessary for maintaining a balance between mind and body, essential for facing the numerous concerts around the world.

The American Space Agency NASA recently named an asteroid after him: giovanniallevi111561.