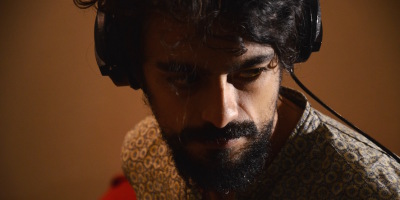 Guitarist, composer and improviser, Francesco began his musical studies with Jazz. After his graduation in Statistic and Economy decided to dedicate his life to music: as a young guitar player he was composing original music for his own bands, traveling to New York and Paris, where he dug into Jazz while starting to be interested in many other genres and styles.

Nowadays he is one of the main improvisers of his generation and a much in demand musician: he has collaborated with many Italian, European and American personalities such Gianluca Petrella, Antonello Salis, Jim Black, Bobby Previte, Shane Endsley, Dave Binney, Fabrizio Bosso, Paolo Fresu, Nils Landgren just to name a few.

He was also part for 6 years of the projects Myanmarmeetseurope supported by Goethe Institute, which led him to Asia an Europe.

In 2015 he obtained Top Jazz (The Italian Music Jazz annual pool) for the album Wild Dance (ECM) by Enrico Rava, whose he is a long time collaborator since 2013.

His albums got attention of critics and audience: Francesco has been voted as best guitar player by the JazzIT annual readers pool from 2013 to 2016.

Over the years his curiosity led him to collaborate with dancers, visual artists, choreographers and multidisciplinary projects: in addiction to his own projects YELLOW SQUEEDS, BLACKLINE, he collaborates with the dancer Roberta Racis and the artist Sara Bernabucci.

The result is a kaleidoscopic but still clearly identified personality, constantly on the limit between genres and styles.