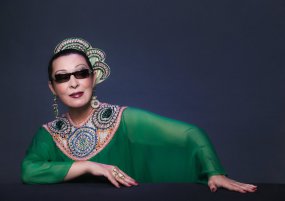 María Isabel Quiñones, "Martirio", was born in Huelva. She is a pioneer in the recovery and updating of classic Spanish and Latin American popular music. She began performing in the 80s as part of the groups Jarcha and Veneno with Pata Negra and Kiko Veneno. In 1986 she released her first album, "Estoy mala", marking the start of a constantly changing musical career.

She has collaborated with artists such as Chavela Vargas, Soledad Bravo, Chano Dominguez and many others.

Her enigmatic and sophisticated image is the business card of an always curious, modern and avant-garde artist.

For three decades of career, Martirio has renewed the Spanish copla giving it the universality it deserves and freeing it from the ties of the past. She has immersed herself in flamenco, jazz, bossa nova, tango, bolero, pop, rock and even sevillanas.

Martirio's musical language is created and developed through each one of her different album, in a wide spectrum of different music and genres that she has naturally mixed. She borrows her style and inspiration from flamenco that she adapts or merge with more modern musical trends, especially jazz and tango but also pop, rock, swing, and guaracha, in this sense, she can properly be ranked as a New Flamenco artist.

"A Bola De Nieve" (Universal, 2019) is her most recent project: a tribute - in duo with Chano Dominguez - to the great Cuban singer and pianist Bola De Nieve.