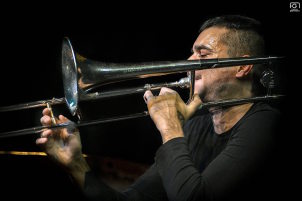 In the "electronic area" he has collaborated with 9lazy9 (Ninja Tunes) and performed with the worldwide famous avant duo Matmos. In the same music fields stands the collaboration with Ricardo Villalobos and Max Loderbauer for the project Re:ECM. He works also with Nicola Conte and dj Ralf. His first electronic disc, “103 Ep”, is released in February 2015 by Electronique.it Records.

Actually he’s active with the new “Cosmic Renaissance”, the quintet composed by Mirco Rubegni (trumpet) Francesco Ponticelli (bass), Federico Scettri (drums) and Simone Padovani (percussions); the famous and acclaimed duo “SoupStar”, with the pianist Giovanni Guidi: they recorded a new disc for ECM in February 2015 after an important year (the last one) made by a lot of concerts all around the world; “Tubolibre” Quartet with Oren Marshall (tuba), Gabrio Baldacci (guitar) and Cristiano Calcagnile (drums); “Il bidone” quintet, the tribute to Nino Rota; in duo with Gabrio Baldacci; the solo “Exp and Tricks”, a musical journey in the first year of the Cinema (project in collaboration with Cineteca di Bologna).

He works continuously with Enrico Rava and recently he created (with Paolo Fresu, Steven Bernstein and Marcus Rojas) the powerful quartet Brass Bang.