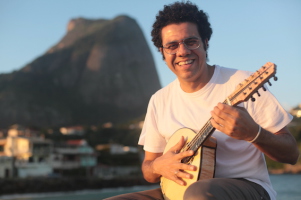 Transgressor of the instrument (10 strings mandolim) and creator of a revolutionary technique, the press in the USA immediately called him "Jimmy Hendrix of the mandolin", the French "Prince of the mandolin" and the Brazilian "king". Virtuoso, bright and unique are some of the adjectives in the life of this musician, who infects audiences touring throughout the world, building a career of numerous awards for music focusing on beauty and spontaneity. Hamilton is a musician who combines tradition and modernity performing smoothly through any different formations (solo, duo, quintet, orchestra), achieving thus a way of exposing the musical ideas and impressions about life with "the heart at his fingertips." In 2016 he won the Latin Grammy in the Jazz Section with the project “Samba de Chico”.