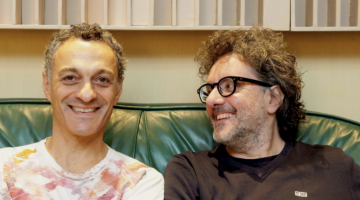 Giovanni Ceccarelli and Ferruccio Spinetti met in 1989 at the Sienese Jazz Seminars and ever since they formed a deep friendship and artistic collaboration. They formed a duo in 2008, giving together a series of successful concerts in Italy, also with the participation of saxophonist Marcello Allulli. From 2009, the year in which the two musicians from the InventaRio group, the duo stopped performing until their return in 2019. Ferruccio and Giovanni recorded four albums together: "InventaRio" and "InventaRio meets Ivan Lins" by the group of the same name - awarded a Latin Grammy Award nomination -  "Météores'' by the trio of Giovanni Ceccarelli and  participation of the double bass player in Giovanni's album "Daydreamin". The two artists share a deep musical empathy, where in the balance between writing and improvisation a profound lyricism and a great capacity for mutual listening emerge. More Morricone was born from a proposal by the record producer Pierre Darmon of the French label Bonsaï Music, with which Giovanni and Ferruccio have been collaborating for many years. This record work, recorded in the winter of 2019, pays homage to the art of the great composer Ennio Morricone - recently passed away - focusing on his musical work dedicated to cinema. Giovanni and Ferruccio selected music that is well known to the general public - such as those composed for the films "Nuovo Cinema Paradiso", "Once Upon a Time In America'' ​​and for the television series "La Octopus "- and excerpts from lesser known cinematographic works - among others "La Tarantola Dal Ventre Nero",", "Metello" and "Gli Avvoltoi Hanno Fame". The careful arrangement work carried out on Morricone's music aims to present his compositions in their most essential form, through solo, duo - also using overdubs - and with the precious contribution of the Belgian singer Chrystel Wautier or by vocalist Cristina Renzetti.